The Pardon of Assisi – August 2nd

The Pardon of Assisi (or Portiuncula Indulgence) is the possibility to receive a plenary indulgence—elimination of temporal punishment due to sin– at the chapel during the first two days of August.In St. Francis’ day, people could gain a plenary indulgence by visiting one of three churches: Holy Sepulcher (Jerusalem), St. Peter’s (Rome) or Santiago de Compostela (Spain). Not everyone could afford or undertake such travel, so Francis asked that the Portiuncula be designated such a place. Pope Honorius III agreed in 1216 but restricted this to the anniversary of the chapel’s dedication (August 2).
The Feast of the Pardon of Assisi has since been celebrated between Vespers on August 1 and sundown on August 2. For many centuries, the indulgence could only be received by visiting St Mary of the Angels. However, it is now possible to receive the indulgence at all Franciscan churches and also at all the parish churches in Assisi when meeting the conditions of Communion, Confession and praying for the Pope’s intentions. 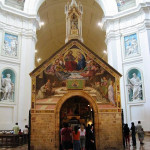